Iwasaki and Jnats (part one)


After visiting Shigefusa I drove to Iwasaki's Workshop in the afternoon. The official name of this workshop is "Sanjyo Seisakujo". In this workshop blacksmith Mizuochi is making the Iwaski brand Kamisori now. Mizuochi san worked here when he was young but he had to succeed his fathers shop and stopped making razors. When he got 60 years old he came back because Iwasaki san got ill and could not fulfill orders. Mizouchi san is working here only at afternoon because he has other things to do before noon.

Here I want to report what Iwasaki san and Mizouchi san told me about honing razor with natural stones.

My first question was about difference between synthetic and natural stones. Why natural stones makes hazy finish to jigane and why the mirror finish to the hagane is not so bright compared to synthetic stones.

The natural stone abrasives are softer and break during honing. Also the clay which is the binder for naturals will scratch jigane. The scratches to the hagane are interrupted and short because part of the abrasives move from the matrix more easily. The scratches are also more shallow. Iwasaki san said you can see the difference at the blade surface when you magnify it with microscope. Magnification of 400x or 500x would be enough.
The short scratches reflect light different (it will scatter more  than just straight long lines) so the steel look better and more hazy at the same grit.
I made a drawing what Iwasaki san told me and draw with his finger in air: 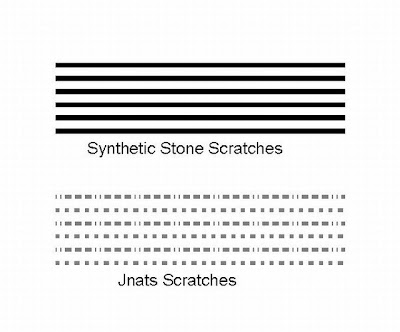 Iwasaki san continued that if the scratches comes to the edge the synthetic stone will make more serrated edge than the natural stone edge at same grit.

I thanked Iwasaki san about the precisely explanation and asked if I can make pictures of the naturals he has.
The answer was we do not have finishing stones in this workshop. There is too much dust here.
Yes there was dust there. Mizuochi san said he has the finishing stone at home where he make the final finish to the Iwasaki razors. He assured me that I can make pictures next time at his home.
He added how he makes final finish to the razors and what is important.
You must have clean air without dust. Some years ago a new home was build at his neighborhood. It was a sunny day in March and he had his windows open. The carpenters who build the new house where cutting hard boards outside. On that day he could no make the finish on the razors. The dust contamination from the new house made it impossible.
He also said it is not only for finish the razor.
If he comes home after work in the workshop (especially when he has done the coarse sharpening with coarse stones) his face is contaminated with hard and coarse particles. He must wash his face very carefully with soap if he want to shave. Otherwise he does get very small chips at the razor edge and cannot get a clean shave.

I asked Iwasaki san and Mizuochi san about how to prepare the finishing stones and what is most important. I asked if they flatten it with Atoma because I read it on the internet in English but never read about it in Japanese language (that Iwasaki uses Atoma).
The answer was they do not use any diamond stones. They said they use the 3 stone method to flatten and smooth the stone surface. They have more than 3 similar finishing stones so that is their method.
(3 stone method is to flatten with 3 stones like at the picture below. If you use only 2 stones you may have 1 stone convex and 1 stone concave but with 3 stones you get 3 flat or 3 slightly convex stones)

I said thank you very much but not everybody has 3 similar finishing stones.
Is there any suggestion how customers of razor can do with minimal equipment?


If the e-mail link does not work use:
drnaka10 at gmail.com

Hide's Export
Tokyo, Japan
My nickname is Hide. I make posts on forums under the name DrNaka. I am retired now and my work was in the industrial research of polymers. I made the sexagenary cycle and and have a pension life. On the other side I want to be a bridge between abroad and famous craftsmen in Japan. I do no sell knives and stones anymore. The blog is now information only.

All knives I sell are custom made therefore no return policy will be applied.
I will inspect the knife and send pictures before I ship to you.
So far Shigefusa and Yoshikane have made custom knives for my customers with fit and finish of a higher standard than their stock knives.
I am asking them for extra care. But still, very light scratches may occur on the on the softer iron, and this will not be considered a defect in fit and finish.

For legal reasons you must be of legal responsible age to purchase a kitchen knife.
This age is 20 years old in Japan.
I do not know the regulations in your country, but by ordering from Hide's Export, you do affirm that you will only use the knife (or knives) for its intended purpose in the kitchen, and that I will have no legal liability for a for any damage resulting from misuse or improper care after the sale of these knives to you.(misuse or improper care including: washing custom knives in the dishwasher, prolonged exposure of carbon steel to acids or water, use of kitchen knives to cut inappropriate materials, etc.)

Customers must agree to the terms and conditions before asking for a quote or putting in an order. In case of any legal dispute, the Court of Jurisdiction will be Tokyo, Japan.

The customer pays 50% of the price of the knife at the time of order, and the remainder of the price plus the shipping fee are due when the knife is ready to ship.

All posts, descriptions, and pictures and videos on this site are copyrights to Masaru Nakamura unless otherwise noted. No duplication without written permission.

Links to My Friends